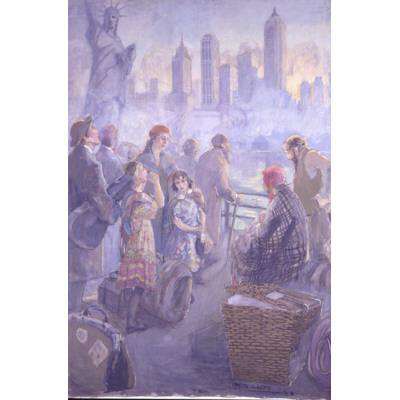 I recently paid a visit to the Brigham Young University Museum of Art. As I wandered through the museum, my eyes were drawn to a large painting at the beginning of an exhibit entitled “Becoming America.” It was a painting by Minerva Teichert, whose style I easily recognized from the plethora of religious artwork I had seen by her. But there was something unique about this particular painting. While Immigrants to New York City (Jewish Refugees) is obviously not an entirely secular work of art, the main themes of the painting relate to people of many differing social, cultural, and ideological backgrounds. This helped draw my focus to the topic of the exhibit: “the many frontiers on which America has been and continues to be formed.” Through her painting, Teichert brought me to one of those frontiers, where I began to reflect on the experiences and contributions of immigrants throughout the history of our nation.

The balance of bright colors and muted tones in the painting highlighted the apprehension of the immigrants and emphasized the important contributions of each member of society in “building America.” The colorful patterns on the dresses of the two little girls set them apart from the rest of the scene that was painted mostly in grays, browns, and muddied purples. This contrast mimicked the feeling that newcomers often have of not fitting in or finding a place in their new environment. At the same time, the distinctiveness of their dress represented the varying backgrounds, views, and ideals that contribute to the American identity. Although their uniqueness may cause immigrants to feel insecure, the artist chose to paint it in a positive light, in a way that brought color and vibrance to the otherwise dull scene. Through this choice of color, the painting reminded me of the importance of each individual in making America what it is and what it has yet to become.

Similarly, the use of red pops of color, a characteristic of many of Teichert’s paintings, caused me to focus on the feelings of people who come seeking refuge in America. The bright red scarf on the head of the hunched woman on the right side of the painting drew my attention to her, particularly emphasizing her unique position compared to the other subjects of the painting. Her posture portrayed a sense of discouragement as she held what appeared to be an infant in the folds of her blanket. The scarf also hid most of her face; this anonymity made her situation less of an individual and more of a universal experience. I saw in the mother the relatable feeling when the journey ahead looks as difficult as the past. In her infant, I saw the helplessness of immigrants in the face of a new life in a potentially unwelcoming place with unfamiliar people and cultural differences. Just as a baby depends on its mother for survival, immigrants are at the mercy of a foreign people for support and acceptance. As I contemplated these messages, I felt sympathy for refugees who come to America hoping to escape the persecution and hardship of the past, only to face additional trials in their new home.

In contrast with the visible discouragement in the painting, an interplay between color and composition conveyed a sense of hope. The mother on the left mirrored the body language of the mother on the right through an expression of sadness and pessimism on her face. However, the direction of her gaze formed part of a triangle that guided my eyes toward her daughter, who displayed a visible change in attitude. She stood in a prayerful position, showing faith and optimism. Her body language seemed to allude to the many persecuted groups throughout history who have come to America seeking religious freedom. She and her father were in parallel, looking upward to the skyline, where a pale-yellow sunrise was touching the horizon. The father’s guitar case also pointed toward the faint light juxtaposed with the muted tones of the rest of the scenery, emphasizing the sunrise as a symbol of new life and hopeful beginnings. This was their chance at a better tomorrow. The upward gaze of the father and daughter then drew my eyes to the Statue of Liberty, which towered above the immigrants as a symbol of acceptance that had welcomed many before them. The symbolism of this statue and the distant sunrise filled me with optimism, as if I were an immigrant seeking refuge, and reminded me of the hope and freedom America should represent.

The choice of this painting as the introductory artwork in the exhibit “Becoming America” made a powerful impression on me. As I stood in front of the New York Harbor scene, I found myself in the boat with those immigrants, anxious about the future but hopeful at the sight of strong symbols of freedom and prosperity. I stood in the place of my ancestors who had endured the journey across the Atlantic and were laying eyes on their new home for the first time. They were the pioneers who shaped the America I know. In their shoes, I gained a new respect for the adversity they faced while rebuilding their lives here and adding to the richness of the American identity. I felt a desire to continue their legacy and contribute to the formation of a great nation as I read the final statement in the introduction to the gallery: “America’s power is most evident not in what it is, but in what it is still becoming.”