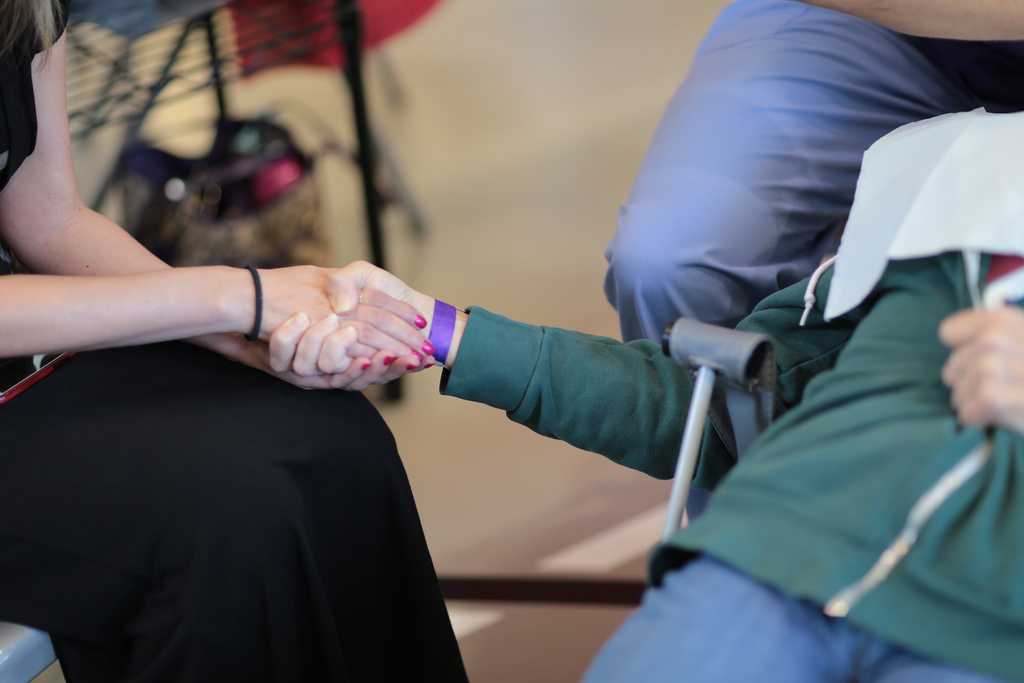 I knew a young mother who was overwhelmed and exhausted.  Her friends and neighbors recognized the signs and came to the rescue.  One took her two children to the park.  One came and swept the floor.  One arrived to fold the laundry.  One stopped by for a friendly visit.  They all brought a meal.  They lifted her burdens and her spirits. She was still tired, but she felt less so.  And therefore she could keep going and later return the care and compassion to another.

I remember a couple who began their life together with a car and not much else.  They married and finished college.  They started their family.  They continued on to graduate school.  They were poor.  Very poor.  When their third child was born with a hole in his heart, they received the funds for his medical needs from a kind charity.  He struggled at first, but thrived later due to good care and lots of love.  They finally finished school and started life in a new city.  Things were tough, but they continued to work hard.  Finally they were able to purchase a home for their family.  They worked hard to make a place to raise their family. Friends gave them furniture, they painted cinder blocks and stained wooden boards to make book cases.  They bought used furniture.  Slowly, slowly with help and hard work they became not poor, but financially secure. The mother never forgot the help that charity gave her young son.  Every year she would reach out to neighbors to ask for donations in order to give back the help she was so grateful for all those years before.

I met a mother who was worried about her children.  They had a roof over their heads and good schools to attend.  They had clothes enough, barely.  And food enough, kind of.  But they were in a very precarious state.  She tried to work as best she could, but her visa limited her resources and her income.  She has now found friends and family who are working to help her make a better, more stable life for herself and her children.  She wants the American Dream for her family and she is willing to work for it, she just needed the support and encouragement from others around her to help make that happen.

I know of a man who is very grateful to be in America.  He had fled the Congo as a refugee and could not return for fear of his life.  He could not reunite with his wife and children because they could not come here and he could not go there.  He was sad.  He walked into a neighborhood church one day in search of some peace and comfort and community.  He made friends.  He shared his burdens.  He found solace.  He commented one day that until he had walked into that church, this country had given him food, a place to live and a chance to start again, but not friendship or kindness beyond the economic help.  He was very grateful for the new chance he had been given in his new country, but he was now so so glad that he had finally found a place where he belonged. A place where he could give back. A place where he had found friendship and where he could give friendship as well.  He had found a home.

Years ago I was inspired by a man who organized an outreach to the homeless every year. He would organize youth and adult drivers to gather warm clothes and blankets, make lunches, and then take the physical sustenance downtown. They went to two parks, usually, to distribute the food, clothes and blankets. But, and he emphasized this every year, what they really needed to do was to reach out to these men and women and talk to them. Converse. Get to know them. Share ideas, good wishes, and kindness. Not just the kindness of food–although every person received a bag lunch (or two)–not just the kindness of warmth–although they also each got to choose a blanket or a jacket or a coat from the offerings–but the kindness of a friendly word with a young person or a group of young people or perhaps their adult driver.

Then there was the young man just out of college and beginning his first adult job.  As he walked from the train station to his office each day, he was troubled by those who waited along the sidewalks and near the entrances asking for a handout.  Anything to help out.  He wanted to help.  And so he devised a plan.  He purchased granola bars, the kind that give good sustenance and he also wrote a note.  He carefully wrapped each bar with a note of compassion and placed a rubber band around each one.  Then he put the granola bars in his bag.  Now when he encounters someone needing help, he reaches into his bag, pulls out a granola bar and gives it with an encouraging word.  He hopes the kind words found in the note will encourage while the food sustains.